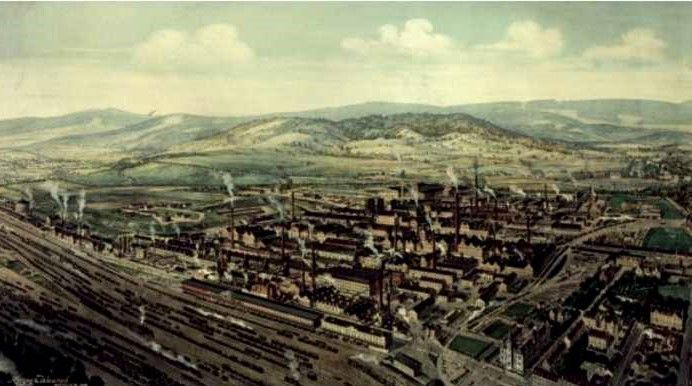 166th anniversary of our foundation

SPOLCHEMIE celebrated its 166th anniversary on the 13th of February. Indeed, the foundations of today’s SPOLCHEMIE date back to a meeting of the company’s founders – who included members of the Austro-Hungarian aristocracy as well as leading entrepreneurs – at Schwarzenberg Palace in Vienna. The founders were approached by Christian Gustav Clemm and presented with ambitious plans for a large chemical company. By comparison, the chemical giant Bayer was founded only seven years later; in fact, our company ranks among the elite group of the world's longest continuously operating chemical companies, and also among the “family silver” of Czech industries.

SPOLCHEMIE’s headquarters were located in Ústí nad Labem right from the beginning, and its inorganic chemical plants started production there a few years after the company’s foundation. The word "metallurgical", which became part of the company's name because of the assumption that there were reserves of non-ferrous metal ores in the nearby Ore Mountains, remained in the company's name as a silent witness to an idea that never materialised – metallurgy was never part of the company’s activities. Despite this, by the end of the 19th century we had become the largest and, in the European context, one of the most important European chemical companies in the former Austro-Hungarian Empire.

After Czechoslovakia won its independence, Czech capital (represented by Živnobanka) secured a dominant role among the company’s shareholders. In the 1920s and especially in the 1930s, our company expanded its corporate structure and represented virtually all of the Czech chemical industry. We were at the foundation of many successful companies today, including Synthesia Pardubice, Spolana Neratovice, Chemické závody Sokolov, Tonaso Neštěmice and others. The basic plant in Ústí nad Labem was from the very beginning designed primarily for the manufacture of inorganic products; organic dyes and semi-finished products were then added at the turn of the century, representing numerous and demanding organic technologies and processes. After the company’s nationalisation in 1945, the group’s organisation disintegrated and its formerly important position lost its significance over the years; still, in some areas it retained its fundamental role within Comecon, the Eastern Bloc’s economic organisation.

Our chemical plant expanded to also cover the synthetic resin industry in the 1950s, and epoxy resins are now one of the main pillars of current production. By the end of 1990, the company’s production portfolio spanned over 500 products ranging from dyes to cosmetics and the company once again became a joint stock company. However, the product range as well as the company itself had to undergo significant restructuring in the years after that; emphasis was gradually shifted to chemical processes with high added value – areas where the company can compete on a global scale, even in the most demanding markets. And we are still doing that to this day.

The last successful chapter of our modern history began in 2020, when we became a de-facto member of the Kaprain Industrial Holding investment group. This will not only facilitate further development of our company, but also help us tackle the new challenges of the 21st century. Currently, we are not only one of the leading European producers of synthetic epoxy resins and inorganic chemicals, but also a major Czech exporter (we export 80 % of our production to four continents) and we also rank among the most important employers in the region.

Unlike in days long gone, today we place a major emphasis on ecology and sustainability – the company's premises no longer resemble the smoking factories of the "Steel City". We   consider the billions invested in environmentally friendly plants (e.g., modern ecological membrane electrolysis) along with a fundamental reduction of emissions, waste production and pollution as part of our clear-cut duties and responsibilities. In fact, our products also help combat global warming – including, for instance, components for wind farms or the automotive industry, as well as a new project that can have a significant global impact on reducing greenhouse emissions.