Gagarin Viewed the Globe through Sapphire from Spolchemie

“I can see the Earth in the view port.  It is well distinguishable.  I see rivers, the unevenness of the terrain.  The visibility is good.  Everything is wonderfully visible through the view port.  The visibility is great, beautiful,” Yuri Gagarin reported exactly sixty years ago, after his spaceship Vostok 1 threw off its front aerodynamic screen and revealed to him a view of his home planet.

The Soviet Union was preeminent in conquering space on the 12th of April 1961.  But Czechoslovakia can probably claim a small share in the achievement because of our chemists at Spolchemie who were able to make the largest and purist artificial sapphire in the socialist bloc up to that time, ideal for the view ports of Gagarin’s Vostok 1 rocket.

This legend, which has been passed orally among us at the chemical plant for decades, is now being seriously examined by experts from the Ústí Museum.  Although no documents have been found in our company archives, possibly due to the great secrecy of the project, Ústí historians consider the information to be highly probable.

“When I joined the monocrystals research laboratory as a recent graduate in 1978, my older colleagues told me about the secret production of sapphires in the 1950s for the Soviet arms and rocket industry, including the story of the Vostok,” Zdeněk Rytíř, our former researcher, now retired, remarked.

Experimental work on artificial sapphires started in Czechoslovakia during the war, and in 1947 mass production based on the Swiss Verneuil method patent began in Ústí.  At the same time, we operated a research center that improved these procedures.  And soon we reached extraordinary achievements.

In the years 1960 and 1961, five test models of Vostok 1 were launched in preparation for man’s first space flight. The rocket had three view ports of about ten centimeters in diameter, and the glass in these ports would not have withstood the extreme loads of takeoff and landing.  But an extremely hard artificial corundum, that is, a sapphire, could.  But a common piece looks like a cylinder, which at its thickest point has a diameter of about 2.5 centimeters.  However, Spolchemie found what was to be, at the time, an original solution to this problem. Several experimental products of this type have been preserved in Spolchemie to this day.

Unfortunately, we stopped the production of synthetic corundum in 2015 for economic reasons.  As recently as 2010, our production had reached a total of 75 tons a year and was of a quality unsurpassed in the world. However, Chinese producers were able to compete by offering a price three times lower, and the demand for our artificial corundum practically disappeared.

Artificial corundum from Ústí was used in the American space program after 1989, and it was also used in the production of bulletproof glass, optics (including military optics), LED lamps, as well as jewelry.  Corundum can be found, for example, in different color variants in the copy of the Czech crown jewels.  Historians will continue in their search for evidence of the “Ústí space legend.”  “We doubt that we will find any direct evidence in the Czech archives.  It was a top secret matter, when our official bureaus were probably not even informed as to the exact purpose of Czech corundum research.  We will seek answers from the Russians,” Václav Houfek, Director of the Ústí Museum, remarked.

The artificial (and natural) mineral corundum is the hardest known substance after diamond.  The designation sapphire is used for its various color differences (red is designated as ruby).

Take a look at the gallery of our now extinct operations and some examples of artificial sapphire production at the time. 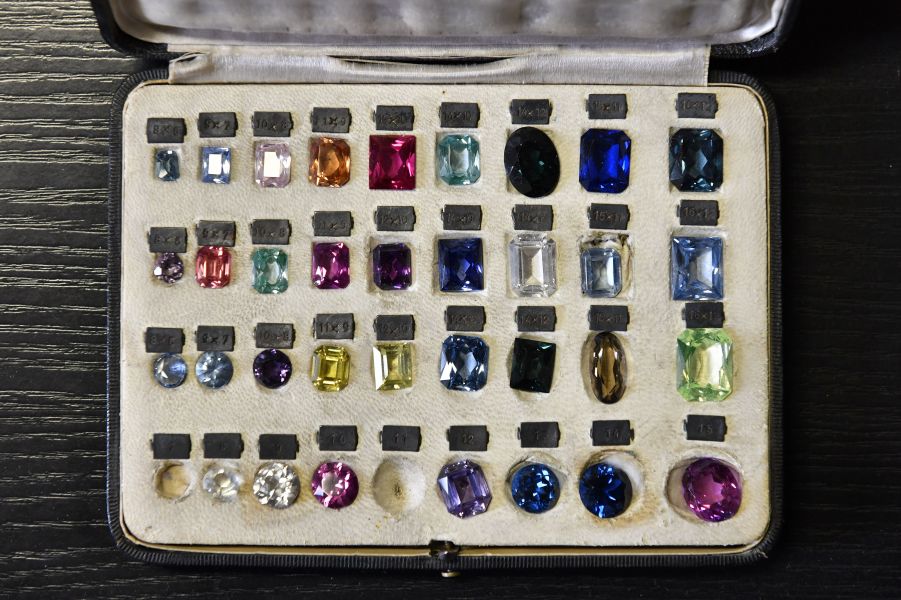